There is a wide range of different types of cyclists and many times these typologies overlap one another. Many names have been coined for different types of riders; hipster, commuter, spandex, parents and kids, etc. Within the past 24 hours I have gotten to ride with several of these..
Last night was the monthly Critical Mass ride in Orlando, and in over 300 cities around the world. Critical Mass is a group ride, which was over 200 riders last night, that rides at a slow to moderate pace through the main arterial streets of the city.  The ride is intended to show bicycle awareness and to protest that bicycles are just as important as any other vehicle on the road. 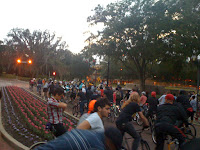 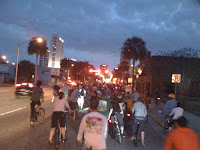 It was pretty cool that I had a woman come up to me and ask me if I ride on Livingston every morning. I said yes, but that I hadn't remembered seeing her out there commuting in. She said that she was driving to work each day and that she drove a big van with dog paw prints painted on it. I actually recall that vehicle, since at 15mph you actually take in most of your surroundings and the dog paw prints are a pretty rare detail.
This morning I did my typical Saturday "Lakemont" ride. I cut through neighborhoods and ride 5 miles to get to the group start location, and the rising sun is the last peaceful moments for the next 2 hours. We had a good group of about 100 riders, ready to scorch the pavement.
The ride itself is 40 miles in 1.5 hours and there is no stopping or waiting for people to catch up. As we rode this morning I heard rumblings in the pack that a group of 6 or 7 were going to break off and attack at mile 30, and that is never good. When a breakaway occurs, the riders go off the front in a line and the pack responds and tries to catch them and pull them back in. It takes a ride that is a fast 25mph into a wild sprint that surpasses 30mph and splinters the pack.

Well the attackers kept their word at mile 30 and we finally caught them after riding at 32mph for about 2 miles. We finished the ride and ended with only about 30 riders (people get dropped and finish the ride alone or in small groups, or they end and head home early). 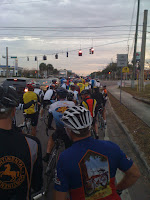 I love it because it sets up a great Saturday when you are home by 10am and feel like you already accomplished something and don't have to worry about doing anything but relaxing the rest of the day.
Newer Post Older Post Home